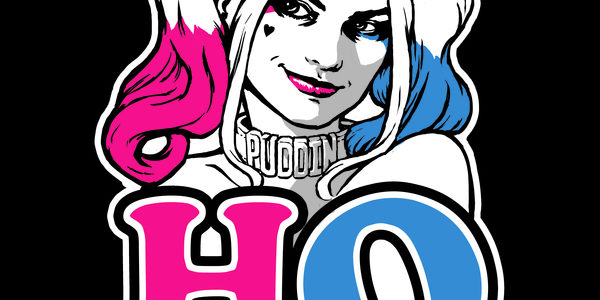 As for the artwork, it says true to both styles thanks to the common elements such as pig tails, sultriness, and that bad girl demenor. It features contrasting White, Blue, and Pink as the color scheme as anything Harley Quinn via Suicide Squad should be. It's cute.
This is a badass design to be worn at any setting or event such as Comic-Con or going to the mall.
As for the print, It turned out PERFECT AS ALWAYS from Neatoshop. The colors especially the Pink pops which is where all other POD companies are lacking as it is a very difficult color to print.
This Suicide Squad Girl hoodie will make a great for any Suicide Squad or Harley Quinn fan.

Elvira Quinn Mistress of Mayhem Shirt Design Close Up TeePublic Print Quality Reivew
Elvira Quinn Mistress of Mayhem Shirt Design TAG TeePublic Print Quality Reivew
Elvira Quinn Mistress of Mayhem Shirt Design Worn TeePublic Print Quality Reivew
The Elvira Quinn Mistress of Mayhem shirt design is for the Harley Quinn and Elvira fans out there. True, it is a hell of a Venn diagram to find that demographic. But let's face it, everyone loves a bad girl and this one is twice as naughty. It doesn't matter who the character is based on. It is sexy and cool.
As for the concept, it is a mash up but not a typical one. Because this one takes a 2016 spin of the 90's creation Harley Quinn (the Batman villain) and combines it with the campy 80's horror icon Elvira Mistress of the Dark. For anyone who is familiar with Elvira the design concept is more than obvious. But for anyone born in the past 20 years, they probably haven't heard of Elvira. At least not that I've come across. Regardless, this combo is unique enough that it deserved review.
Now for the artwork. This a much softer and cuter than say the Batman or Harley Comic books and definitely brattier and more girlish. Where as Batman and Elvira often have darker and more Gothic elements to them. Aside from the style, you can see that there is a nice balance of both characters's attributes in this mash up. For instance, the character has Harley's multicolored hair but Elvira's hairstyle. Her clothing follows the same suit, as she is wearing the Elvira style of clothing but with the addition of Harley Quinn's trademark diamond motif. The shading and coloring are as professional as it gets. To sum it up, it falls between realism and comic book for this particular cartoon style.
Finally, for the print, it is on par with what I've come to expect from this brand. This one was printed up in the middle of the 2016 Christmas rush and features a tag rather than being their normal tag-less offering.
This Elvira Quinn Mistress of Mayhem  shirt will make a nice gift for fans of either of these franchises.