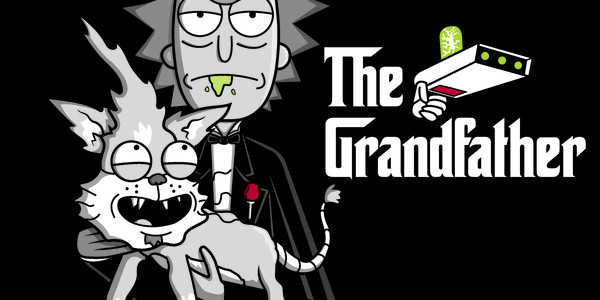 The Grandfather 2 tee design is for Rick and Morty and The Godfather fans.

The concept is a mash up and parody of Francis Ford Coppola classic The Godfather trilogy and Cartoon Network's Rick and Morty. A concept that has been done by a few different artists and fans. Rather than have Marlon Brando as The Godfather holding a cat it has Rick holding Squanchy. In the logo instead of a hand holding puppeteer strings it is a hand holding Rick's portal gun. It is a good nod to both franchises and it works because Rock Sanchez is a badass. As for the artwork, the characters are drawn exactly as they are in the cartoon with no variation so no artistic creative points are given. It all has to do with the layout which is also derivative. The colors and shading are nicely done.

While this is The Godfather pose it is definitely more of a Rick and Morty fan tee.

The Grandfather 2 Tee Design by Raffiti.

Is available on T-shirts, Hoodies, Long Sleeves, Sweatshirts and Dog T-shirts. Black fabric color is mandatory. The review breakdown is as follows: 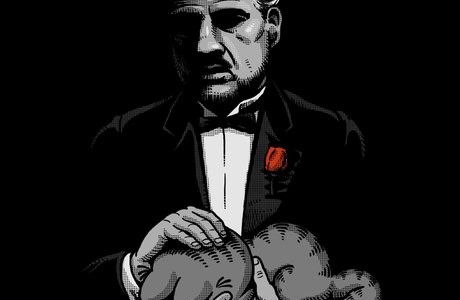 The Boss' Cat tee is for fans of The Godfather and the Garfield comic strip. This design is a mashup parody and will only be truly appreciated by fans of both franchises and of Garfield specifically. People that only like The Godfather might see this parody as an insult to the masterpiece.

After seeing this, it is no freaking wonder Garfield loves Italian food. Being the prized kitty of a mob boss has its advantages. Jon Arbuckle was just some cartoonist schmuck that tried to hold the fat cat for a fat ransom. It is just too bad that this concept has been done before, more than a few times by many people.

This artwork finds that fine line between realism and cartoon and blurs it nicely. Although, half of Garfield's head should technically be covered in more shadow as to be consistent with the Godfather's head.

Ben Chen drew Garfield in the original comic style and altered the Godfather to match the Garfield comic style. This version is better than others of the same concept.

The Boss' Cat design makes for a fun tee to wear to any casual event. Movie and Pizza nights will never be the same.

Is available on: Tees, Phone Cases and Sweatshirts. Black fabric is mandatory and it works well with this artwork. The original cover art of The Godfather was on a Black background so it is a no brainer. The review breakdown is as follows: