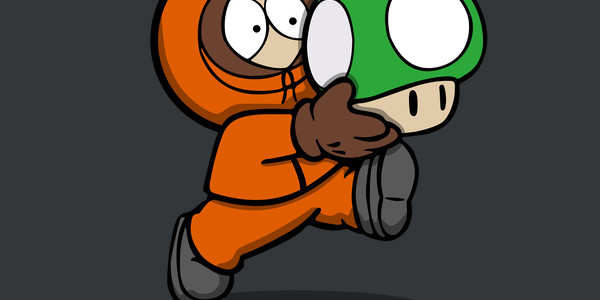 The Kenny Bros tee design is for South Park and Super Mario Bros. fans.
The concept for the Kenny Bros tee is that Kenny dies an infinite amount of times and he could use (or does use hmmm?) 1-Up mushrooms for extra lives. Having him drawn in the Mario style in a video game Super Mario Bros. 2 (Shown below) cover art parody is the best way to illustrate this idea. The best part by far is that the mushroom is bigger than his head.

As for the artwork, it is a nice mix of South Park and Super Mario Bros. drawing styles. The coloring is good. The mild shading is a bit inconsistent as it isn't over all of the elements. But that is okay because no one will notice.
This is a welcomed mashup with lots of humor. Of all the Super Mario Bros. parodies out there this one is deserving. Perhaps some version with text would be even better.
This funny shirt is good for any lighthearted occasion and place. Especially where video games are involved.

Is available on T-shirts. Charcoal, Dark Chocolate, and Navy are the only fabric color choices. They work well for this design they offer the most contrast.