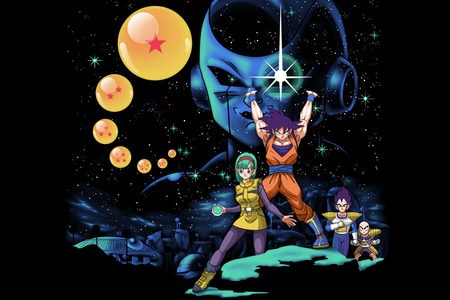 Dragon Wars Z T Shirt Design Close Up Ript Apparel Print Quality Review
Dragon Wars Z T Shirt Design TAG Ript Apparel Print Quality Review
Dragon Wars Z T Shirt Design Worn Ript Apparel Print Quality Review
The Dragon Wars Z T-shirt design is for the Dragon Ball Z and Star Wars fans.
The concept is more of a parody than it is a mash up. Luckily, because it would just be outright stupid to combine the two as a mashup. Seems like anything and everything is mashed together at some point. With this, 5 of the Dragon Ball Z characters are spoofing the Star Wars episode 4: A New Hope movie poster (shown below). Goku has power from his hands blasting up in the sky instead of Luke Skywalker holding up a lightsaber. Bulma, holding a Blue orb below him, instead of Princess Leia Organa standing while holding a blaster. Frieza is the shadowy face in space instead of Darth Vader's trademarked helmet. Instead of R2D2 and C3PO in the background there is Vegeta and Krillin. An series of a Dragon Balls replaces the tie fighters as in the sky. The location is pretty much the same in both scenes a desert landscape give or take a few details depending on the franchise.

As for the artwork, it is pretty much flawless. The shading in this piece is outstanding. As are the colors. The fact that everything stays true to Dragon Ball Z is again, a smart move.

Is available on T-shirts, Sweatshirts, and Tank tops. The exclusives offer some fabric color choices but the dailies do not. The review breakdown is as follows: