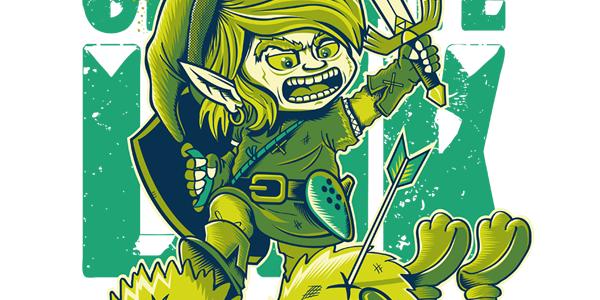 The Ultimate Link tee design is a crossover design that plays on the rivalry between Link and the hive minded cuccos (chickens) of Hyrule. Even though in the games Link gets what he deserves for instigating the violence.
The concept is funny but dark and twisted. Link hates cuccos so damn much that he takes out his anger and frustration against all birds. Hence the appearance of two of the most famous fictional avian characters Angry Birds and Big Bird in the cross over. With the Master Sword and Hylian shield, Link has slain them in cold blood.
As for the artwork, it is good and sports a green monotone color scheme like an old school game boy game. The shading is a little inconsistent as Link has relatively none at least on his skin and clothing. That and he doesn't cast a shadow over the corpses. Sure there are some hatched and filled in areas like inside the hat, the back of the shield and in his ear for example but his left side of his face should have some shading. Perhaps to emphasize Link and his living essence more than the other characters. Other than that it is drawn rather well and is a different take on the character so no points are removed for the shading in this case.
This is a demented but funny Zelda themed tee that fans of the Legend of Zelda franchise would like, at least the angry ones. By that statement, I am not condoning that anger is good and people should attack animals and Muppets as that behavior is wrong.
This is good gaming shirt that is meant to make Link's fans laugh.

Is available on T-shirts, Hoodies, Sweatshirts, Long Sleeve Tees and Tank Tops. Many fabric colors are available. The review breakdown is as follows: