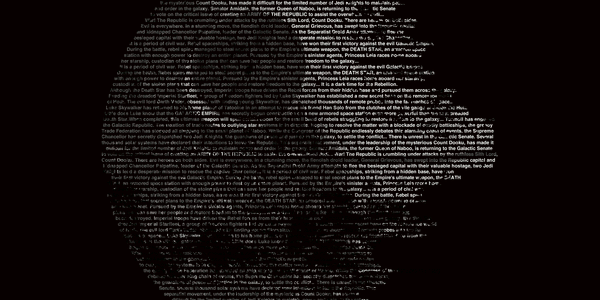 The Type Star tee design is for Star Wars fans.
For The concept, this takes the first 6 episode opening crawls and arranges them in the shape of the Death Star. This design took a lot of patience to make even if it was done as an overlay layer on top of a Death Star base image (which gets removed) and the shading is done by changing the color of the font thus creating some depth.
Here are parts of the crawls to give you an idea of what is typed.

Episode I: The Phantom Menace: "Turmoil has engulfed the Galactic Republic. The taxation of trade routes to outlying star systems is in dispute. Hoping to resolve the matter with a blockade of deadly battleships, the greedy Trade Federation has stopped all shipping to the small planet of Naboo. While the Congress of the Republic endlessly debates this alarming chain of events, the Supreme Chancellor has secretly dispatched two Jedi Knights, the guardians of peace and justice in the galaxy, to settle the conflict...."

Episode II: Attack of the Clones: "There is unrest in the Galactic Senate. Several thousand solar systems have declared their intentions to leave the Republic. This separatist movement, under the leadership of the mysterious Count Dooku, has made it difficult for the limited number of Jedi Knights to maintain peace and order in the galaxy. Senator Amidala, the former Queen of Naboo, is returning to the Galactic Senate to vote on the critical issue of creating an ARMY OF THE REPUBLIC to assist the overwhelmed Jedi...."

Episode III: Revenge of the Sith: "War! The Republic is crumbling under attacks by the ruthless Sith Lord, Count Dooku. There are heroes on both sides. Evil is everywhere. In a stunning move, the fiendish droid leader, General Grievous, has swept into the Republic capital and kidnapped Chancellor Palpatine, leader of the Galactic Senate. As the Separatist Droid Army attempts to flee the besieged capital with their valuable hostage, two Jedi Knights lead a desperate mission to rescue the captive Chancellor...."

Episode IV: A New Hope: "It is a period of civil war. Rebel spaceships, striking from a hidden base, have won their first victory against the evil Galactic Empire. During the battle, Rebel spies managed to steal secret plans to the Empire's ultimate weapon, the DEATH STAR, an armored space station with enough power to destroy an entire planet. Pursued by the Empire's sinister agents, Princess Leia races home aboard her starship, custodian of the stolen plans that can save her people and restore freedom to the galaxy...."

Episode V: The Empire Strikes Back: "It is a dark time for the Rebellion. Although the Death Star has been destroyed, Imperial troops have driven the Rebel forces from their hidden base and pursued them across the galaxy. Evading the dreaded Imperial Starfleet, a group of freedom fighters led by Luke Skywalker has established a new secret base on the remote ice world of Hoth. The evil lord Darth Vader, obsessed with finding young Skywalker, has dispatched thousands of remote probes into the far reaches of space...."

Episode VI: Return of the Jedi: "Luke Skywalker has returned to his home planet of Tatooine in an attempt to rescue his friend Han Solo from the clutches of the vile gangster Jabba the Hutt. Little does Luke know that the GALACTIC EMPIRE has secretly begun construction on a new armored space station even more powerful than the first dreaded Death Star. When completed, this ultimate weapon will spell certain doom for the small band of rebels struggling to restore freedom to the galaxy..."

As for the Type Star Tee artwork, the font colors are appropriately Death Star tones.
The Type Star tee design is perfect for wearing to screenings of Star Wars, or while attending Comic-Cons and so on and so forth. 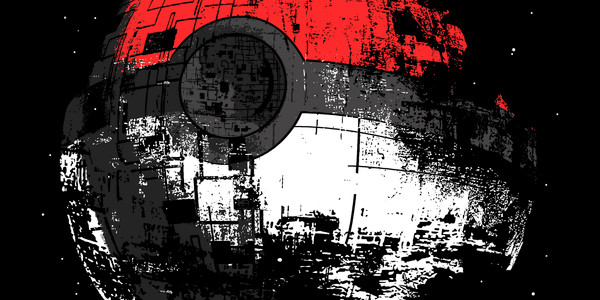 The Poked To Death tee design is for Star Wars and Pokemon fans.
First off, this is a mash up done right. It takes two similar shapes of main plot objects from two different franchises and blends them into one super geeky image. When Zerobriant first made this design it went huge, beyond viral. It was featured in magazines and if I'm not mistaken made a cameo or two on television. Becoming an icon in its own right. It brings generations together.
The Poked To Death tee is a very well executed mash up design that does everything right. Strong contrast with bold colors and changing an iconic object and making it look like another iconic object while still being recognizable as the prior object. The terms "Genius" and "Brilliant" come to mind. I'm not even a fan of Pokemon and I like this design. It is as simple as that. The design speaks for itself.
The Poked To Death design is perfect for wearing to screenings of Star Wars, or watching Pokemon or playing video their respective video games or attending Comic-Cons and so on and so forth.