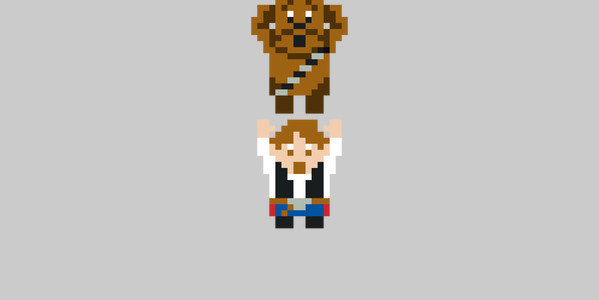 The Flying Solo tee design is for the Star Wars and The Legend Of Zelda fans.
The concept for the Flying Solo tee is actually very funny. It is a parody of The Legend of Zelda "It's dangerous to go alone take this." (shown below) where Han Solo holds up Chewbacca like Link holds up his sword. It is goofy as Hell but it is true to a point. Han needs the wookie. Chewbacca has always had Han's back and fans could argue that Han wouldn't last solo.

As for the artwork, it is very simple and pixelated in the same style as the original NES game. The colors are good for what it is. Although choosing a contrasting background that shows both the characters and the font well without losing body parts into obscurity is a bit daunting. Some scenery would had improved this some, to be more like the Legend of Zelda screen shot.
The Flying Solo is for all Link and Han fans regardless of age. It doesn't get any more old school than this. 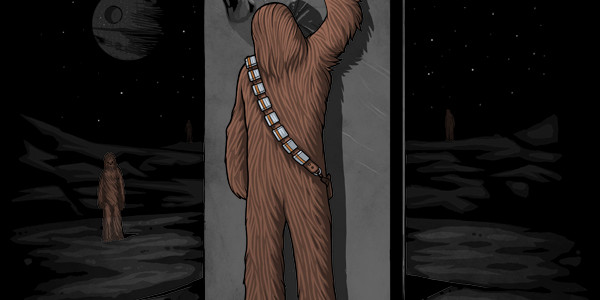 The A Star Odyssey tee design is for the Star Wars fans that enjoy other science fiction movies such as 2001: a Space Odyssey.
The concept replaces the man apes and monolith of 2001: A Space Odyssey with Chewbacca and Han Solo frozen in carbonite. Which is a cool idea but it is not original. There is another design called Hanolith which is much older and done by the artist known as Bleee. Naolito's take on the concept is a bit more realistic as far as the art style.

As for the artwork, it is worthy of praise. Good coloring as to be expected from Naolito. The shading is a bit reversed for Chewbacca when in relation to Han but that is probably done on purpose to keep Han looking true to the movie. The background as awesome as it is with the wookies and Deathstar are darkened for some atmospheric perspective. Thus keeping Chewbacca and Han as the focal point.
This A Star Odyssey will make a nice gift for the Star Wars geeks as well as the Stanley Kubrick and Arthur C. Clarke fans.
This is a great Sci-Fi shirt that fits in anywhere such as Comic-Con or coffee shops.

Is available on T-shirts, Hoodies, Tank tops and Crewnecks. Black, Charcoal and Navy are the only fabric color options currently available. The review breakdown is as follows: 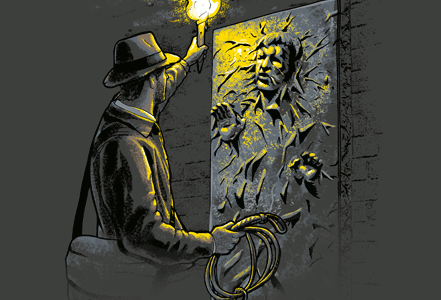 The Starcheology tee design is for Star Wars and Indiana Jones fans. Because Harrison Ford is the man.
Imagine if you were an archaeologist and you found what appears to be a fossil or even a piece of ancient artwork with your face on it. Wouldn't that freak you the Hell out? Damn right it would. At first, you'd probably think that you were losing your mind. Then you'd begin to question all of reality itself. Finally, you might fold into the fetal position while sucking your thumb and rocking back and forth telling yourself that everything will be alright.
Starcheology is a nicely illustrated and executed mashup concept. This works especially well since both Han Solo and Indiana Jones are played by the same actor which is Harrison Ford. From the topnotch coloring to the consistent shading, Terry Peppers deserves nothing but praise for this.
The Starcheology design is on children's apparel too so the stories of George Lucas live on for generations. It is perfect for wearing to screenings of Star Wars, Indiana Jones, Comic cons and so on and so forth.
If you like this design, please check out our Star Wars Tee Gallery for more great designs as well as one super relevant one in the You May Also Like link.
While visiting the retailer link you may get the following message. (If so do as it suggests and it should be available again.)

Asphalt is the only fabric color available which also serves as the color. It really is the best color option. The review breakdown is as follows: