Till My Last Breath Shirt Design Close Up TeePublic Print Quality Reivew
Till My Last Breath Shirt Design TAG TeePublic Print Quality Reivew
Till My Last Breath Shirt Design Worn TeePublic Print Quality Reivew
The Till My Last Breath shirt design is for the romantics, especially the Goth ones.
Conceptually, this is not the most original piece. Skulls (Death), Roses, and beautiful women can be seen together in countless art pieces now and throughout art antiquity. But this one is damn good. The couple's embrace being the focus of the design.
As for the artwork, I like it but it could be a lot better. First, the shading is realistic and consistent. Second, the colors fit the classic love and death theme. Third, this design has emotion captured well. Even the skeleton is happy despite being dead. But this design does not work for all of the Fabric colors offered. Aside from the subjects being cropped suddenly, the border of the design is done poorly. With a DTG printer this "faded" stuff can be printed as a smudge (such as the case here). This design isn't really a good design for a DTG printed tee.
This Till My Last Breath shirt will make a nice gift for the metalheads, as well as horror fans, and the aforementioned romantics IF YOU GET WALL ART such as a poster. But not as a shirt.
As for the print, this is not one of the best examples of a TeePublic shirt and therefore it gets a 3 out of 5 stars. This is not necessarily the fault of the printer but more of the designer's. Although it is possible to print it properly if they play with the settings. But it would probably require a few test prints and that is not profitable. It may not be 100% true to the design thumbnail's tones but it bold and it does include every detail. At least the ones that weren't blurred out.
Overall, it makes a decent casual shirt that fits in anywhere.

Till My Last Breath Shirt Design by EnchantedWhispers.

Is available on T-shirts, Hoodies, Tank tops and Crewnecks. Many fabric colors are available depending on the style but only Black works for this design. The review breakdown is as follows: 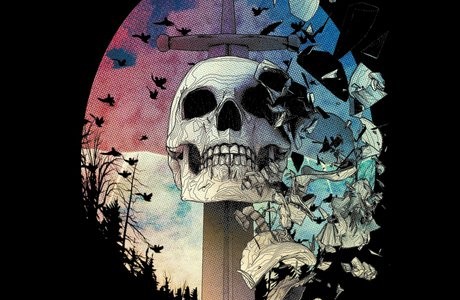 The Fear Cuts Deeper Than Swords tee is for the Game of Thrones fans.

A sword shoved through the top of a skull clean to the bottom of the lower jaw ( after the head was decapitated of course) says a lot. It says "I F#$ked Up" from the skull's perspective. It also says "Danger leave this area, run away, run away now you fool." At least that is what I'd think if I was walking and came across this dire looking scene. Hence the name of the design.

The Fear Cuts Deeper Than Swords design is ideal to wear when watching Game of Thrones or anything else in the Fantasy genre and rock concerts.

Is available on: Tees, Phone Cases and Wall Art. Black colored fabric is mandatory and it works well with this artwork. The fabric becomes part of the design as silhouettes of plant life crop the oval frame. The review breakdown is as follows: