Arm The Animals Tee Brand is a charitable business that supports Animal Rights. Meaning that a portion of the proceeds goes to various charities supporting that cause.

As for the Print Quality, the shirts and fleece that we have are printed slightly above the average Direct To Garment digital prints and are on par with ones that you would find at sites such Redbubble.

This is a print-to-order type of business so the turnaround time is usually great. Here is their shipping policy in their own words:

"We run most online orders on a “print to order basis” and we begin fulfillment as soon as possible. We buy blanks, produce, QC, and ship every day of the week and we can turn most orders in 5-7 business days. We are always working on this process to make it faster and more efficient and each quarter, we can get our orders out a day or two quicker. "

How did Arm The Animals Tee Brand get started and what is your brand all about?

Arm The Animals was born from tragedy in 2010 as an attempt to express the inexpressible. Created following the untimely death of my sister (who a lifelong animal advocate and “pet parent” to a dozen rescues), Arm The Animals would serve as a living tribute and means of carrying on a legacy that was ended too soon. It all started as an emotional reaction and a hobby, but thankfully, it took and has evolved into the brand you see today.

What are the ATA ideals?

Our ideals are really simple: Make killer tees and make an impact on the welfare of as many animals in need as possible. We want to be the voice of people out there who are not extremists, but truly care about animal welfare. We like to send a strong message via imagery and up to this point, we think we have done a good job of that. Charitable cause are really personal and subjective, but we see millions of animals in need and we just want to help as best we can. Our company motto is, “Speak for the Speechless & Defend the Defenseless”, so that’s the basic credo all of our designs speak to.

Who designs the tees?

95% of all designs are done in house and by myself or RJ Ochoa. We try to do as much in-house as possible, but about 2 years ago, we began reaching out and using a small network of artists from around the world. We have released items featuring art from Thailand, The Philippines Australia, The UAE, Ukraine and more. We really like the idea of getting a new, “Global take” on our concepts, which can be tough to do from inside the company. We have also had guest artists come and work in the office with us for weeks at a time; Franz Garcia (http://franzdg.blogspot.com/) & Tony Koehl (http://www.sketchthesoul.com/featured/they-died-not-knowing-tony-koehl.html) made major contributions to our releases over the past 2 years in particular.

What inspires the tees?

We have been inspired by making an impact on the general welfare of animals, but certain instances also influence us. For example, when Cecil the lion was killed last year, it inspired a hugely successful design that raised over $12,000 for the ZCTF, who patrols the area where Cecil was killed. Originally, ATA started as just a hobby to help cat/dog shelters and it has now mushroomed into covering all animals of all types. So many species are facing extinction and plight that there is no shortage of inspiration and when it all comes together, like it did with Cecil, the results are amazing!

How would you classify the tees?

We’re actually proud that there is no clear classification for our tees; I mean, they are graphic tees, but you can’t simply say they are high fashion, or hipster, or beach life inspired or political, etc. To us, they are all that… Animal welfare cuts across every demographic on the planet, so we’re lucky to be able to appeal to so many different kinds of people. This isn’t easy, but it is a good problem to have in our estimation.

When we researched animal welfare tees back in 2010 when we started the company - all we found was kittens and butterflies, or blood and guts - with nothing in between for the every man or every woman out there. We wanted to make tees for people who are pissed and care about animals and want to show it - so that’s what we attempted to do. We have had any kind of person you could imagine support us and have even seen three generations of a family all buy a different shirts from us at an event. That’s something special and it’s not something a ton of brands can pull off.

The review breakdown of their DTG Printed products are as follows: 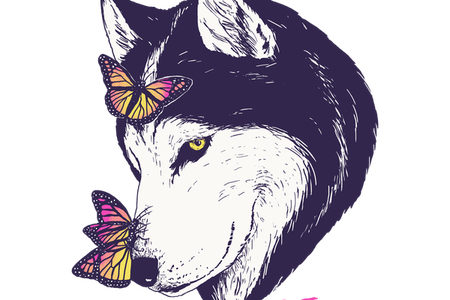 Savage AF Hoodie Design Close Up NeatoShop Print Quality Review
Savage AF Hoodie Design TAG NeatoShop Print Quality Review
Savage AF Hoodie Design Worn NeatoShop Print Quality Review
The Savage AF hoodie feaures on a very cute girl husky with little butterflies in front of her face. The title is in hot pink letters with "SAVAGE" written on the bottom of the illusration. Whether you love huskies or just think this designis charming this hoodie is just for you!
The concept is gentleness even if the title is menacing. On that note, the female husky can be really sweet and calm. Firstly, there are 2 butterflies, one in her nose and another on her forehead. The expression on her face is content. Secondly, her left eye is on point saying that she is at peace. Thirdly, the ears of the husky are perked up listening to nature around her.
As for the artwork, the White and Black playful husky is drawn lifelike. As are the monarch butterfiles. The colors of the butterflies in her face is Yellow, Orange and Pink. However, the pink is the only non lifelike features. Her visiable eye is also Yellow.

I recommend this wonderful hoodie for those who like Huskies and who like the beautiful things in life.

Is also available on various T-shirts, Long Sleeves, Sweatshirts, Dog T-shirts and more. There are many fabric color choices available as well, each depending on what style is chosen. The review breakdown is as follows:

Pocket Papillon Puppy Design Close Up Print Quality Review Neatoshop
Pocket Papillon Puppy Design TAG Print Quality Review Neatoshop
Pocket Papillon Puppy Design Worn Print Quality Review Neatoshop
The Pocket Papillon Puppy T-shirt design features this particular dog breed in a fake pocket. The dog is a little bit raggedy and it's charm is lighting up the t-shirt. People who love cute puppies will love this one! Of course we might be biased as our dog and mascot as you can see is a Papillon.
The concept is nothing new as characters in pockets are done all the time. Such as this Raptor one. This one is nice for the particular breed that it portrays. The result is very playful.
As for the artwork, it is done in a standard American perhaps folksy cartoon style. It is essentially a still portrait as no movement is detailed. The papillon's color is Copper around the ears and White in the bottom half. His tongue is sticking out as if he wants to play, so it has plenty of emotion.
Also, I would totally recommend this t-shirt because everyone will love the simplicity and cuteness of this Papillon puppy!
As for the print, It turned out PERFECT AS ALWAYS from Neatoshop. The colors stand out more than the competition. This time we chose the Hanes Heavyweight Tee as a canvas.

Is also available on T-shirts, Hoodies, Long Sleeves, Sweatshirts, Dog T-shirts and more. There are many fabric color choices available as well, each depending on what style is chosen. The review breakdown is as follows: 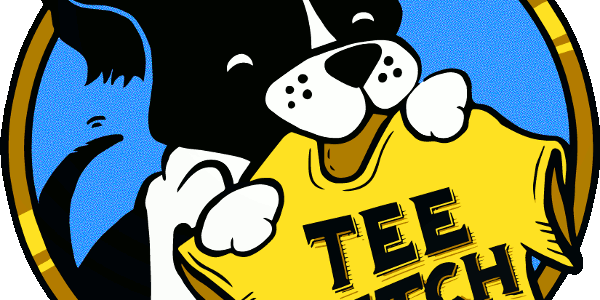 Is available on Dog T-shirts. There are many fabric color choices available. The review breakdown is as follows:

The Satan's Little Helper tee is for the fans of Greek Mythology and cute things. Even if Cerberus the hound of Hades is an adorable 3-headed puppy sans the serpent tail, this tee gets classified as \m/ METAL \m/. Even if it is culturally inaccurate as it mixes up the Antichrist mythology with that of the Hades mythology such as the 666 reference and the title of the tee.

Suddenly, the underworld doesn't seem so bad. Sure the puppy is a freak of nature and badass. But just look at it. It's just an innocent little creature. Worthy of hours of playing Frisbee and being spoiled. How can anything with much pet power be all bad? It can't! But just remember that 3 mouths equals 3 times the amount that will come out the other end.

This artwork is a great collaboration between Olly Moss and Ross Zietz. They gave each head its own expression and therefore unique personality. They kept the design clean and simple with no shading except for the drop shadows. It has a nice fur effect using the less is more approach. From a design perspective, this is everything that a great tee should be in terms of design elements and layout. It looks good up close and from far away.

The Satan's Little Helper design is ideal for any casual event or get together. There will always be some oddball out there that will take offense to the tee as it features the guardian of the gates to Hades but to Hell with them overzealous prudes.

Is available on: Tees and Phone Cases. Maroon fabric for Men's and Scarlet Red fabric for Women's is mandatory and it works well with this artwork. A Black version would had worked well if not better. The review breakdown is as follows: