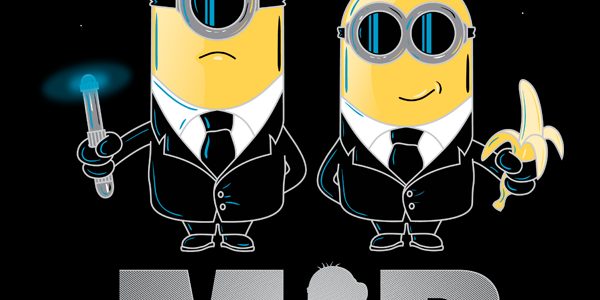 Minions In Black Tee Design Close Up NeatoShop Print Quality Review
Minions In Black Tee Design TAG NeatoShop Print Quality Review
Minions In Black Tee Design Worn NeatoShop Print Quality Review
The Minions in Black tee design features a mashup of the lovable henchmen from the Despicable Me series of movies and the main characters from the Men In Black (M.I.B.) movies. The Minions in Black tee design is for the people that have fallen head over heels for the small yellow minions in overalls from the Despicable Me movies and to lesser extent fans of the MIB or Men in Black Franchise.
The concept revolves around when agents J and K wipe the memories of the people who witness extra-terrestrial encounters in the movies. The shirt sports the minions standing in the classic J and K pose where one is holding the device and the other sporting the minion’s love of bananas as a replacement. They are also wearing the iconic MIB suits worn by every agent. One of the nicer touches is definitely the minion replacing the “I” in the MIB logo at the bottom of the tee. The design presents itself well on the black fabric allowing the minions to pop because of their yellow color and the white outline present around the minions allows their suits to really look crisp and sharp. The concept is great too where one of the minions is serious and looks like a true MIB agent but the other perfectly counters it with the more silly side of the minions and the clash just makes this design work. It’s everything you would expect from a minion inspired tee.
The Minions in Black tee would be the perfect gift for anyone who loves these adorable characters and as we can tell by their take over on the big screen and in merchandising is most kids and adults. It is a good casual shirt that fits snug and comfy and would be great for lying in bed and watching TV or Netflix.

Is available on T-shirts, Hoodies, Tank tops and Crewnecks. BLACK is the only fabric color offered and is only color that truly fits the theme. The review breakdown is as follows: