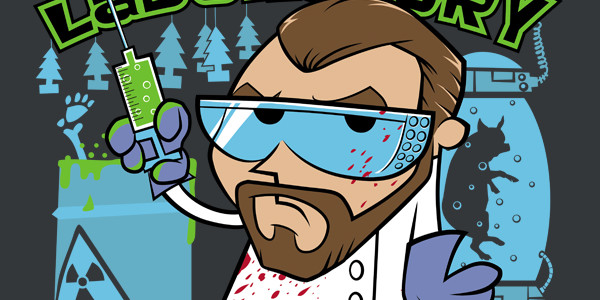 The Krieger's Laboratory tee design is for the Dexter's Laboratory and Archer fans. Who doesn't side with the mad scientists?
The concept is a good 50/50 mashup of Dexter (the cartoon scientist not the serial killer of serial killers) and Dr. Algernop Krieger. It blends the twisted world of Krieger's experiments into Dexter's lab. They have a lot of themes in common. For 2 cartoons from different decades, the humor proves timeless.
As for the artwork, it is done in the Dexter's Laboratory style. The flat background simple backgrounds paired with a colorful foreground character. And by color I mean blood splatter and toxic green substances. The angry bitter face works with both franchises. But more impressive than illustrating in the Dexter's Laboratory style is the subtle signature and how it is incorporated into the design. The way a signature should be.
Anyone that enjoys both cartoons will want to add this tee to their collection as it is one of those generation gap fillers that bring like-minded folks together (at least the mad scientists types)..

Is available on T-shirts. Charcoal, Deep Royal, Navy, Turquoise and White are the fabric color choices that are available. They work well for this design as they double as the color of the sky.

The Men of Science tee design is for the Futurama, Rick and Morty and Archer fans. Specifically the ones that like science and the mad scientist type of characters.
The concept is hilarious, awesome and one of those I WISH type scenarios. If a crossover cartoon would come into existence that featured these three characters it would make my year. Professor Farnsworth, Rick Sanchez and Dr. Algernop Krieger are not just insanely funny they are characters that no one in their right mind would ever cross or screw over. The fing-longer is a great choice for Professor Farnsworth's gadget. Of course Rick's gadget is his inter-dimensional portal gun. Krieger's Magic Breathe Strips are extremely funny but not necessarily the best choice for his device. For these three mad scientists to team up would be like releasing the Apocalypse upon the world. The world would die laughing via a comedy disease from another dimension released by some sort of doomsday device.
As for the artwork, it is not the best but it is far from the worst. The characters' skin tones are blacked out but the clothing isn't. Which is weird that it's that inconsistent but oddly it doesn't take that much away from this concept. The coloring isn't the best but it is good enough to distinguish the characteristics. As for the shading, it is non existent unless you count the aforementioned black out skin tones. The layout is simple and it works. There doesn't need to be anything else to execute the idea meaning the gag is delivered instantly with what there is. Which is what makes it a good tee. More action and detail might mess it up.
This Men of Science tee will make a nice gift for science buffs and fans of these cartoons: Futurama, Rick and Morty and of course Archer.