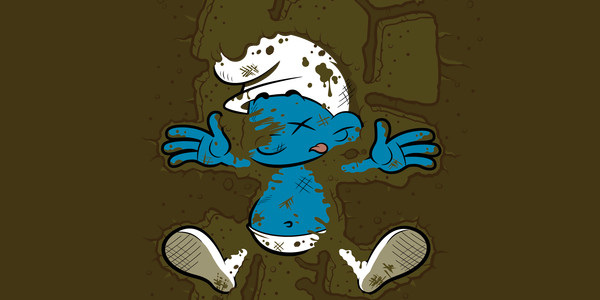 The Unexpected visitor tee design is for the people who love parodies but hate Smurfs.
The concept is a dead Smurf crushed by a human foot. It also has a repeated theme from history and science. Such as when a foreign organism enters an ecosystem that is not its own, it brings death to the existing lifeforms within that ecosystem by upsetting the natural balance or via direct contact. Just like Frogs in Australia, Bunnies in America, and White man entering Native American territory.
On that note, this is a great but demented parody of one the 1958 comic characters from Les Schtroumpfs which later became known as the Smurfs. I'm guessing that this is Squishy Smurf. What too easy?
As for the artwork, it is clean with tonal and crosshatched shading. The latter also serves as scuffs and scrapes. On the Military Green fabric it looks good with a pressed dirt effect. On the White fabric it looks like snow pressed down to exposed mud. Either fabric color works well with this design. Not many designs are as versatile as this one is when lending itself to fabric.
This Unexpected Visitor design has attitude and a form of hatred towards blue beings. So while it is good for adults, I can not recommended it as a school garment for kids. People tend to throw a fit over the stupidest crap nowadays turning everything into a big issue. The People For The Ethical Treatment of Cartoons would have an effing field day with this design.

Is available on T-shirts, Hoodies, Long Sleeves, Sweatshirts and Dog T-shirts. There are two fabric colors to choose from, Military Green and White. The review breakdown is as follows: