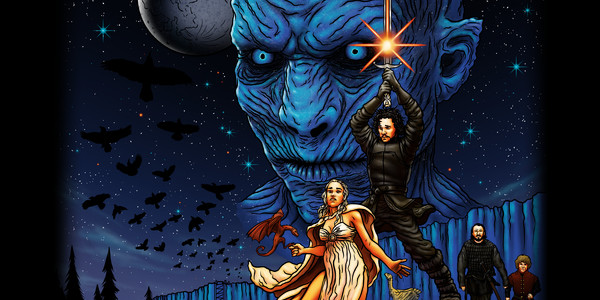 THIS DESIGN IS NO LONGER AVAILABLE FROM THIS RETAILER.
The Throne Wars tee design is for the Game of Thrones and Star Wars fans.
The concept is like half parody and half mashup. In this, the Game of Thrones characters are spoofing the Star Wars episode 4: A New Hope movie poster (shown below). Ravens fly above instead of tie fighters. Jon Snow is holding up a Longclaw with a burst or glow coming from it while Daenerys Targaryen has the red dragon perched on her finger. Bronn and Tyrion Lannister are replacing the Droids in the background. The Night's King is the shadowy face in space instead of Darth Vader's trademarked helmet. The location is the Wall but the foreground has a desert like rock which seems a little out of place considering the Wall. As for the artwork, it is superb. The colors are vivid and the shading is better than most of the New Hope parodies and mash ups.
This Throne Wars tee will make a nice gift for the Game of Thrones fans. Even some Star Wars fans would appreciate it.
Like most of the designs on this site, it would make a great Comic-Con shirt.

Is available on T-shirts, Hoodies, Tank Tops, Sweatshirts, Long Sleeves, Dog T-shirts. Black, Charcoal and Navy are the fabric colors are available. Black is really the best and only real choice for a good looking tee, Navy would look rather retro and is second best. Charcoal makes the design look faded according to the thumbnails. The review breakdown is as follows: