The Plumber's closet tee design is for the Mario fans who have trouble figuring out what to wear.
The concept for the Plumber's Closet tee is to show all of Mario's known costumes and suits and have him stand before them all indecisive like a woman on a date night. It makes sense that Mario would have a closet this big since he was originally a carpenter. I just want to yell at this shirt "You're a plumber man pick the damn overalls." This character and wardrobe concept has been done with other franchises and at this point in time I am not sure which one was first. If I had to guess I'd say this one was.
As for the artwork, it is illustrated well. Lots of colors and consistent soft shading make this eye catching.The layout is ideal for the gag.
The Plumber's Closet tee will make a nice gift for any Nintendo fan.
This is a good gamer's shirt that fits in anywhere.

Is available on T-shirts, Hoodies, Tank tops and Crewnecks. A few light fabric colors are available depending on the style. The review breakdown is as follows: 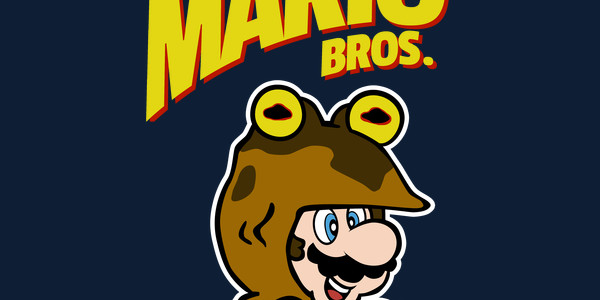 The HypnoMario Bros. tee design is for the Futurama fans and Super Mario Bros. Fans.
The concept is simple, funny and self explanatory mash up. Rather than a plain ole boring frog suit that Mario and Luigi would wear to give let them swim faster, jump higher, swim through water currents and hop while on land, this suit presumably gives them the powers of the Hypnotoad.
As for the artwork, it appropriately represents both franchises well. The Hypnotoad eyes are done well enough. The colors work on any Fabric color thanks to the White stroke around the suit that makes it stand out on darker color fabrics. Everything else is taken from Super Mario Bros. 3 such as the font styling, the pose and Mario's face. There is no shading but it really isn't needed, even thoguh it would had been nice to see the extra detail.
This funny shirt is good for those who miss Futurama and have fond memories or moments playing any Super Mario Bros. game.

Is available on T-shirts. Many fabric color choices are available. They work well for this design as they double as the color of the sky.