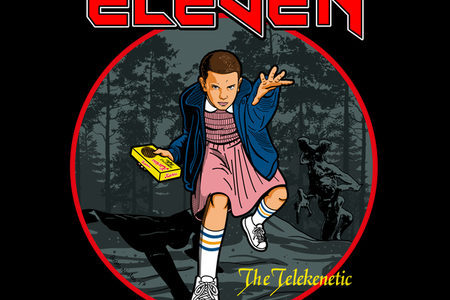 As for the artwork, it is awesome. Eleven is full of detail and the likeness is uncanny. In addition, other show elements replace the rest of the album cover such as her box of frozen waffles in place of the sword and an empty hand reaching out replacing the Union Jack (flag). As well as featuring a demogorgon instead of the Grim Reaper in the bottom right corner. All mirroring their counterparts perfectly. Also, the shading and coloring is masterfully done as is expected from Boggs Nicolas. Overall, the print turned out perfectly, on the Next Level brand of blank used. And as Always, the RED printed beautifully.
This Eleven The Telekinetic tee will make a nice gift for the Stranger Things and Iron Maiden fans that like both franchises. Plus, it is available in kid sizes so they won't miss out on this sci-fi and rock legend tribute.
Makes a great fan shirt that fits in anywhere such as Comic-Con or to rock concerts.

Is also available on T-shirts, Hoodies, Long Sleeves, Sweatshirts, Dog T-shirts and more. There are many fabric color choices available as well, each depending on what style is chosen. The review breakdown is as follows: