Ariel The Little Mermaid Shirt Design Close Up TeePublic Print Quality Reivew
Ariel The Little Mermaid Shirt Design TAG TeePublic Print Quality Reivew
Ariel The Little Mermaid Shirt Design Worn TeePublic Print Quality Reivew
The Ariel The Little Mermaid shirt design is for the Disney fans, especially the adults that dig the quirky Redhead.
Conceptually, this is simply to make Ariel from the 1989 Animated movie The Little Mermaid, a more realistic Pin-Up Girl. This isn't a new and original concept as there are many like it out there in the world. Especially of the low-brow variety sporting Ariel with tattoos. This one does not. The artist focuses on showing that Ariel can be sexy as well as cute. While this may tarnish some people's cherished views of the Disney princess, others see it as symbol of empowerment for women, both animated and real. The thing to keep in mind is that it is still art and art is always subjective.
As for the artwork, it is done remarkably well. First, please consider the shading. It is worthy of a tattoo as it is steps beyond that of a flat cartoon. Second, you will notice that the coloring is bold and that it stays true to character. Third, the layout of Ariel's pose rather captures her elegance and it is done rather tastefully. However, the only nitpick that I have about this design is that the White outline. It just isn't needed and it looks wrong in some places. Such as between the sweeps of her hair. Other than that this design is a solid 5 out of 5 stars.
This Ariel The Little Mermaid Shirt will make a nice gift for the pin-up girl enthusiasts and the Disney Princess buffs. Plus, it is available in kid sizes which isn't a bad thing since Ariel isn't revealing too much of herself.
As for the print, this is one of better and best examples of a TeePublic shirt and therefore it gets a 5 out of 5 stars. It may not be 100% true to the design thumbnail's tones but it bold and it does include every detail.
Overall, it makes a good casual shirt that fits in anywhere such as Coffee shops or Comic-Cons.

Life is Beautiful Shirt Design Close Up TeePublic Print Quality Reivew
Life is Beautiful Shirt Design TAG TeePublic Print Quality Reivew
Life is Beautiful Shirt Design Worn TeePublic Print Quality Reivew
The Life Is Beautiful shirt design is for the zombie enthusiasts, Pin Up Girls fans. Generally, anyone into the creepy and the macabre should appreciate this ironic design. Because it is a little different than the typical gore design. Hence this review.
Conceptually, this is a parody based on couples posing together. Except that this just isn't your typical run of the mill couple. Especially since the undead are usually not photogenic.
The first thing that anyone with eyes will notice is the girl with her cute face and busty chest. She is beautiful, but is she alive? The second thing, is that the guy illustrated here is the complete opposite as he is definitely not beautiful at all and is certainly not alive. The third thing you will see is that they are happy, it seems like they would be miserable. But why? Lastly, after taking all of that in, you will start to wonder "Is she really that hot or does she just look that good in comparison to him?".
As for the artwork, it is some of the best out there on POD sites. The details are insane with realistic textures such as the characters' skin tones which are either gross and rotting or simply vampire pale. Also, the colors compliment each other well with the slight Greens and Reds.
In conclusion, this Life Is Beautiful shirt will make a nice gift for the fans of The Walking Dead, Zombie Apocalypse, and anything else that is zombie related.

Velma Boo Tee Design Close Up TeePublic Print Quality Reivew
Velma Boo Tee Design TAG TeePublic Print Quality Reivew
Velma Boo Tee Design Worn TeePublic Print Quality Reivew
The Velma Boo shirt design is for the grown up Scooby Doo fans. Featuring Velma in almost all of her glory.
Now this concept is purely perverted of course. To begin with, Velma is taking off her sweater, revealing the under boobs of a flawless pair double D's. Also, she is giving a very seductive stare. This sort of behavior is not what we would typically expect from the classic "good girl" cartoon character. Which is the reason why this tee is getting reviewed.
As for the artwork, it is well done, perfect in fact. First, the colors are true to the Scooby Doo franchise and theme. Second, Velma's likeness is remastered brilliantly. Third, there is the shading which makes or breaks a design. It made this one as the details fall somewhere in between that of cartoon and realism and provides some much needed originality to an otherwise overused character. Last, even the signature is nicely done in a more subtle way than most. Say what you want about its mature content, the art on this is top notch. This design dares to be different. It's edgy. Fans always knew she had A LOT more going on for her than what she lets on.
We feel that the Velma Boo Shirt will make a nice gift for the of age Scooby Doo and Pin-Up girl fans. Although, it is not appropriate to wear to schools or the workplace. But, it is chill enough for the bar scene and coffee houses.

The Super Playbros tee design is for all the nerds out there that want to see Princess Peach on a Playboy Magazine cover. Nintendo Power ain't got jack on this.
The concept for the Super Playbros tee design is to put a realistic Princess Toadstool (Peach) in a retro style Playboy cover Pin Up Girl pose in a mock cover for a parody of Playboy Magazine. She sits legs crossed on a giant Red troopa shell and has a Invincible star floating above the palm of her hand. The date of the issue is September 1985, an important date for NES as that is the year that Super Mario Bros. was released.
As for the artwork. There are no complaints... nope none. Awesome colors, blending, and shading throughout. The artwork displays an entire arsenal of skills that go well beyond most people's abilities. The layout is just like one or a few of the earlier issues of Playboy with far less cover lines. As a bonus this design gives viewers 1-Ups.
Wear this tee to Comic-Cons, E3, or almost anywhere. However, with the adult nature of this design I wouldn't recommend it as school clothes.

Is available on T-shirts, Hoodies, Tank tops, Posters, Dog T-shirts and Crewnecks. There are many fabric colors available. They all work well with this design. The review breakdown is as follows: 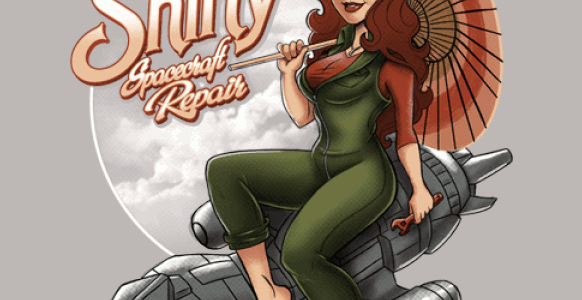 Is available on T-shirts. Silver, Powder Blue, Navy, Turquoise and Mint are the only fabric color options and they are good choices as they are sky colors which match the theme of the design. Although BLACK would had been nice. The review breakdown is as follows:

Siren Tee Design Close Up TeeFury Print Quality Review.
Siren Tee Design TAG TeeFury Print Quality Review
Siren Tee Design Worn TeeFury Print Quality Review
The Siren tee design is for Disney Princesses and fans of Ariel from The Little Mermaid.
The concept is good and low brow definitely has its market. Transforming the Disney Princess into bad asses with varying amounts of punk attitude meets sultry is on the rage now-a-days. Tattoo style pin-ups will always be popular.
As for the artwork, the colors are appropriate for Ariel. It has adequate shading with lots of details. The way that Ariel and the top fish extend out of the oval frame to add a bit of the 3rd dimension is a nice touch. This is more interesting than having everything in a frame looking flat. It is one of those things that distinguishes an a amateur from a professional artist. The Reds on this tee printed closer to my expectations than the Quinn of Diamonds P.O.D. tee (Which wasn't bad at all, just the red didn't match what was on the screen) so it scores slightly higher for the printing method. Making it a 5 out of 5.
This Siren tee will make a nice gift for girls that don't want to conform to other people's expectations.
This design is available on kids' tees too.

Is available on T-shirts. Navy, Turquoise and Mint are the only fabric color options and they are good choices as they are aquatic colors which match the theme of the design. The review breakdown is as follows: 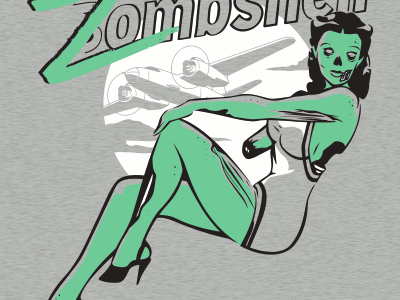 The Zombshell tee design is for the people that love pin-ups, zombies and war planes.

Nothing inspires the squadrons more than a play on the word "Bombshell" along with the replacing of a stunning beauty with a rotting undead corpse of a woman.

The Zombshell design is also on children's apparel. So that they may grow up to be twisted too. This tee is great for horror fans and War War I and II buffs.

The artwork is decent and the concept is amusing. There is not a lot of details to get caught up in and it is similar to the nose art style used on many of the WW1 and WWII planes of which this design is derived, only more simplistic. It came with a blue ink instead of a green ink which is okay... I guess.

The Zombshell hoodie as shown above is screen printed on an American Apparel blank. The fabric is thick and warm.

Is available on: Tees, Hoodies. Silver for Men's and Women's fabric colors are mandatory. Baby Blue is the only color for kids' tees. The review breakdown is as follows:

The Quiet People tee design is for the shy and introverted. As it is the quiet people that often have the most important things to say or contribute to society. Then again, sometimes they are also the most dangerous as well.
Quiet People TeePublic Quality Review Closeup (Washed Once)
Quiet People Tee TeePublic Quality Review
Quiet People Worn TeePublic Quality Review
As for the artwork, there is a tasteful nude brunette pinup with tattoos on her arm. She stands in the middle of the words "Quiet People Have The Loudest Minds" and in front of the "op" in "people". She appears to represent self expression and individuality as well as people's attraction to the mysterious.
This Quiet People tee will make an ideal gift for the shy artsy types, especially if they happen to like pin-up girls.
This design is ideal to wear anywhere that isn't formal. However, it is not appropriate for children or as school or work clothes.

Is available on T-shirts, Hoodies, Tank tops and Crewnecks. White Fabric is mandatory. The review breakdown is as follows: